A Break In Homework

It’s one in the morning and I’m breaking in my homework, starting to create my first database, using Microsoft Access, for my Microcomputer Databases class. With the heavy 18 credit course load, I am thinking I am going to just put up a small reminder whiteboard as well for small projects that aren’t as important as homework of course, but still important. Granted, the semester just started Monday but my last post here was on the 2nd. If I want to try and bring people back for tech fun, current events, etc…it needs to be more frequent. I do have a few projects other than school in play as well but I’ll get to that, and yes, I like to stay busy.

Dropbox heated up the “cloud storage wars” and is now offering a breathtaking 1 Terabyte (1TB) of online storage for $10/month or $99/year. Right now, I’m having to split my storage with my free OneDrive account, which is now going up to 15GB, plenty for most people. I just still don’t trust Microsoft. I want to, but it’s difficult to. Potentially though, anything is crackable. So anything I truly want secure, until I know far more about security, stays on a hard drive that I can disconnect until it is needed. When it comes to backing up school work, website work, the Dropbox will be great as I can use a desktop external hard drive to back up the files but use Dropbox to have it portable. I use two machines currently and that’s just at this point (gadget geek). I like to work from a variety of places for inspiration as well, schoolwork included. OneDrive will, no doubt, fire back with something as well and at least match Dropbox. “I bet my drive’s bigger than your drive”.

We love our projects don’t we? Of course school comes first, that goes without saying, but I also have come to a point where I feel I’ve finally hit the intermediate level instead of just a “noob” on everything. I’m still a “noob” on many things and technically I’ll always be a noob at something. However, at using the skills already learned such as HTML, CSS, JavaScript, jQuery, Photoshop, Dreamweaver, and so forth. I’d like to keep practicing those as well instead of nearly forgetting about them until I get rusty and then have to use them.

First, and foremost, I am taking a Content Management Systems (CMS) class which, at the least, will be teaching me how to use and modify, manipulate the WordPress software CMS (not this website). Which means, eventually, this blog will move to it’s own domain. Moving the blog itself will be a first for me since it will move to a new server, but it will be a fun challenge. I’m still thinking about having others post on here and even know of some tricks to make things even slightly more secure that I will have to play with tomorrow.

The other site is building a photography site for myself. From the very start of my Web Development classes, my goal is to learn to work with a team and go through project management for a company and all that, but also learn to be self-sufficient as well. This means taking some extra classes that aren’t under the Web Development requirements such as Electronic Drawing (using Adobe Illustrator) so that I can do logos, Digital Photography (so that I can take better photographs myself), and so on. I realize I don’t have to do everything myself but I’d like to at least have the ability to if needed. I do have a proposed domain name in mind for the site already and am actually working with an old friend, and Graphic Designer, who is very good at what she does for a logo. I just have to start coming up with some concepts on how I want it to look. I don’t want to go with a simple “only letter configuration” like I’ve done for my musical project in the past. That’s simple enough that I can even do it in Photoshop and doesn’t look as flashy unless she were to put some shadow, texture to it. I also plan to put some examples of photo enhancements on the site as well, if I can get enough permissions from the owners of the original photographs.

I am also a musician and there is a project name that’s defined and a musical concept in mind, however, I would be overloading myself to take on that project at the time and wouldn’t be giving it the time that it deserves. So, that will have to wait.

I will update again much sooner with a more technology, “less me” projected entry. There’s a lot going on in the world out there, I’m sure there’s plenty to discuss.

Before I get to to the earlier Tumblr post, I want to plug a well deserved local eatery that I am very proud to find early on, with help of a friend 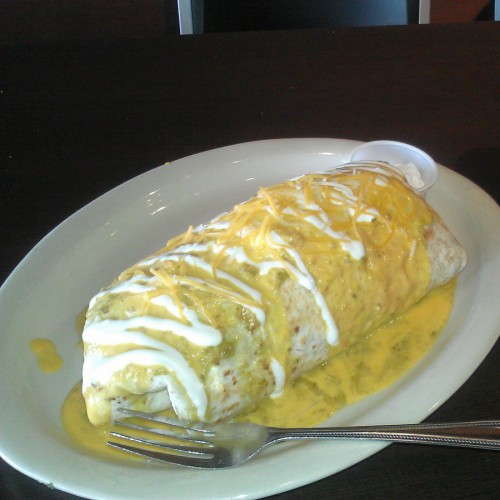 A friend got into Romo’s as it’s one of her favorite places. This place has only recently opened and already gained enough popularity to also earn a location in downtown Fargo’s Black Building (118 Broadway N). It was my first time and their $9 dinner sized burrito, pictured above, not only filled me up once but twice as leftovers later that night. The staff is extremely friendly and helpful. I’ll gladly return and would highly recommend it to anyone.

In twenty five days, the Fall 2014 semester starts. I have my notebooks, OneNote, folders, new dry/erase board, etc all ready to go. The only thing I’m missing are all my books. I do have two of them early that I have been browsing through. I’m also beginning some work on a book on Perl (server-side language) that comes highly recommended by many technical blogs. The book is from the library, but I’ll get my own copy when I have the cash to do so. I’m hoping to find a better programming series that I like. So far, this book seems to come at the topic pretty straightforward.

I did plenty of thinking and think I have a school plot figured out, with some help of some friends and one semi-mentor lending thoughts. The only downside is I’m too eager to learn. I have to realize that I’m not going to get there all at once. Which is obvious, I know this, but it’s hard to not get excited and “weee”.

Grateful to the Fargo Public Library, I do also have books on:
ASP.NET
Office 2013 (in depth)
Access 2013 (in even more depth)
Making Windows 8 Apps with C++
Wireless Networking, and so on.

Most I don’t intend to read a whole lot but it gives me an idea if I find it interesting or not. With most computer (or Computer Science/Information Technology) books being so expensive, it’s much easier to do it this way. Then, I go with Amazon typically and by rating since most of these books are rated by geeks anyway. Godsmack is set to release their sixth studio album titled 1000hp next Tuesday on August 5th, 2014. You can Pre-Order on Amazon now, although I do want to note I see a lot of “clean version” which I’m personally not a fan of. I like the dirty versions, I admit. At the band’s official website, you can check out the link to stream the album for free and hear it now. I’m personally waiting for the “it’s out” moment. Seeing Godsmack in Sioux Falls, SD was very awesome and I hope to see them on the road again very soon.

Back to top
Dorian's Journey

Thoughts and Information on Web/Software Development, Psychology, Philosophy, Music/Other Entertainment, Cognition and Analysis of Many Concepts and Theories

Burial Of My Dreams

Releasing the pressure of my positive and negative headspace.

A day in the life of a girlg33k

A general blog by Brian Wardwell.

The Art and Craft of Blogging

The latest news on WordPress.com and the WordPress community.